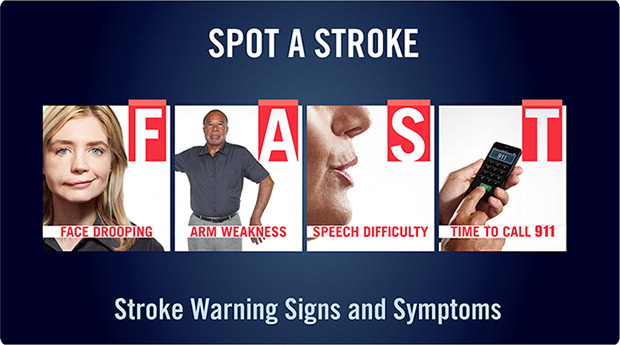 MAY IS AMERICAN STROKE MONTH. While stroke threatens millions of lives, it is largely preventable, treatable and beatable. Together, we can end stroke.™

My family has a history of suffering and dying from strokes. Five of my mother’s sisters had strokes; most died from them. My paternal grandparents also suffered from strokes. I’m concerned. Are you?

“Stroke Awareness Month” is a great time to refresh yourself on the warning signs and to learn about the personal impact of having a stroke.

Here are some  sobering statistics on US data from the Centers for Disease Control and Prevention.

Barbara bravely shares her story about having and recovering from a stroke. She wants you to be informed and prepared. She felt unprepared.

If you’re recovering from a stroke, let her struggle and story inspire you. Know we wish you well on your recovery journey. If you’d like to reach out to Barbara, contact me.

Barbara went about her usual morning routine preparing to play music for Sunday mass. Only this day she was dizzy with a headache and had weak legs. She found herself bumping into walls because she couldn’t walk a straight line. Since she started feeling “fluish” already on Friday, she brushed it off as flu weakness. Afterall, it was the height of flu season. Sunday night her voice became incoherent and her husband called 911.

Even while being transported to the hospital, Barbara didn’t realize she’d had a stroke. She wasn’t showing what she considered two classic stroke symptoms: facial drooping or impaired vision. At the hospital a  CAT scan was normal but a MRI showed she’d had a brain stem stroke.

Barbara spent two days in ICU and later learned her dominant right side was no longer working.

She grieved losing the use of her right hand. The one she usually relied on for guitar picking, piano playing, gripping her cherished violin bow, typing, brushing her teeth and combing her hair; and driving. She loved the insurance business she’d built with her husband and cherished their travel adventures. Upon waking up in ICU, all of these perceived losses were overwhelming. She admits she briefly gave up and wanted to be taken to Oregon, where physician assisted suicide is legal, and die. 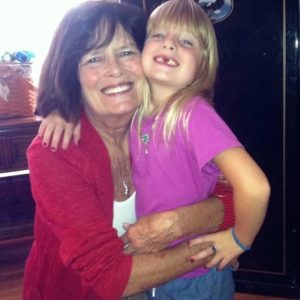 Soon Barbara had a change of heart and was determined to get well again, at whatever cost. Music and grandchildren drove her recovery. She needed to hold her year-old grandson and play hide-and-seek with her 7-year-old twin grandchildren. She definitely longed to play guitar at Sunday mass. After a month in the hospital, Barbara began 12 months of three therapies. Occupational therapy lasted a year. Physical therapy 9 months and speech therapy 6 months.

Barbara’s determination and ability to work hard to achieve what seemed like an insurmountable goal is commendable and applause worthy.

“I am so much better after 15 months. I cannot write with my right hand so I type with my left.” While not yet “up to speed” with her violin or classical piano, she can strum the guitar just fine and is back playing at Sunday mass. “I can’t do any fancy picking yet.”

She’s returned to work with 90 percent of her speech back, explaining to customer groups that she’s a stroke survivor. Eight months post stroke, her foot gave out and broke in four places. Learning to be less self-conscious about her limp is a work-in-progress. 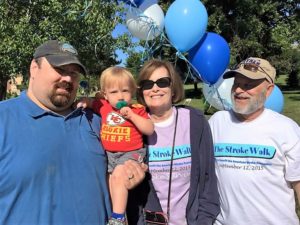 Barbara is eternally grateful for the love and support of her husband, family and friends as well as the devotion and care from her neurologist and therapists. Understandably, she’s much more in touch with her mortality.

She was a healthy, thriving woman who was vigilant about annual checkups. Physicians had not warned her about the possibility of having a stroke because she didn’t have any of the risk factors.

She had quit smoking decades ago, rarely drank and was not overweight. Nor did she have high blood pressure. Both parents passed away from cancer, not strokes.

Become familiar with the sudden symptoms of stroke.

A.–Arm weakness. Ask person to raise both arms. Does one hang downward?

T.–Time to call 911. Check the time so you know when the 1st symptoms appeared. Get emergency medical help ASAP.

Save a life. Share this with loved ones and friends today.