I’m a closet sports junkie. March Madness is my addiction. I study, watch and fill out multiple brackets; and historically win a few. I’m highly competitive by nature and for these 18 days, my drug of choice-competition-is all consuming.

I hunker down in the family room and watch endless hours of collegiate young men bounce and loft basketballs. Their sweat-coated coaches roam the sidelines as rabid fans experience wild mood swings during 40 minute games. There are winners and losers. There certainly are upsets. I root for underdogs, always.

It’s thrilling when lower seeded teams triumph and heart-breaking when my household’s team favorites-Iowa State Cyclones and Louisville Cardinals-are beaten. It’s been reported that companies lose millions during this time period. Apparently I’m not the only one obsessed. My approach to completing brackets and picking winners is more gut than analytical. However, one variable always gets the greatest weight-the head coach.

I pay attention to Bracketology with Joe Lunardi.  I study variables like season record, outstanding players, injuries and tournament location. But I never stray from what I consider the greatest determinant of winning teams-the coach.

There are well-known March Madness perennial coaching favorites like Mike Krzyzewski of Duke. His absence was clearly felt this season while he was recovering from a recent surgery. He has this certain something that attracts great talent and makes these players deliver outstanding basketball. Then, there’s Rick Pitino from the Louisville Cardinals. Loaded with coaching skills and bravado, Pitino leads the favorite team of both my husband and our son. According to them, he’s a near basketball God. UPDATE: Coach Pitino left the University of Louisville disgraced. The University of Louisville Athletic Association (ULAA) terminated his contract on October 16, 2017. 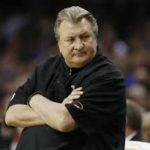 Another tournament constant is West Virginia’s Bobby Huggins. Who doesn’t want to hug Huggins? He’s so teddy bear like. He sits on a sideline stool and ends every game toweling off like he’s just laid everything out on the floor for 40 long minutes. I’m not fooled. He coaches against my Alma mater Iowa State in the Big 12 Conference. He might look like a teddy bear, but Huggins consistently has winning teams with oppressive defense. Seems more like a tiger, perhaps, than a teddy bear.

Coaches I Miss on the Sidelines 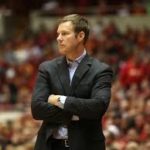 I have to admit that come March I miss watching the gracefulness and steadiness of Fred Hoiberg. Coach Hoiberg was both a legendary player and coach at Iowa State who now coaches the Chicago Bulls.  He never seemed to overreact. He stood steadfast with arms crossed,understanding a game doesn’t end until the final buzzer sounds. Cool and collected, almost always. [2020: Now head men’s basketball coach at University of Nebraska-Lincoln, where his maternal grandfather used to coach.] 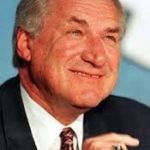 I certainly miss one of the greatest and most loyal basketball teachers ever- Dean Smith from the University of North Carolina at Chapel Hill. I admired the fact that he was always dressed like he was going to work and spoke so eloquently about his players. He understood that they were “just imperfect kids.” I secretly wanted him as a coach. I longed to meet or shadow him. Oh, the many things I could’ve learned in person not just about basketball but about life from Coach Smith. Will there ever be another one like him? 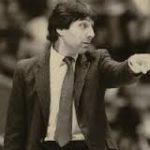 I’m old enough to remember Jimmy Valvano from North Carolina State University.  In the mind of my five foot tall body I see this larger-than-life man with wet-looking, dark hair running up and down the sidelines. He always appeared to be hailing a taxi cab or signaling to an approaching ambulance. His hand gestures were that large and urgent. He was intense, but with a gentle giant sort of kindness about him. The world did lose him too early.

Former Indiana Coach, Bobby Knight, and Georgetown’s John Thompson taught me a few choice words during March Madness and often had me repeating a threat from childhood, “Do I need to wash your mouth out with soap?” Meanwhile Lute Olson appeared like a statesman on the sidelines. Lute, a fellow North Dakotan, coached at Iowa-the fierce rival of Iowa State.  I forgave him. Afterall, there aren’t that many North Dakotans on the national basketball stage. Well, there’s Phil Jackson-who attended high school and college in North Dakota and famously coached the Chicago Bulls during the Michael Jordan era. Next he coached the Los Angeles  Lakers before taking the presidency of the New York Knicks, where he is today.

Everyone knows Kansas and Kentucky are perennial favorites. These teams will remain such with their stellar records and recruiting abilities led by Bill Self and John Calipari, respectively. It’s not that I don’t think they are great coaches. It’s just that they are two or three steps ahead of other teams because of these factors. What I really respect and take notice of are those coaches who aren’t universally known. Those who dig and lead less talented teams to the top. Here are 4 college basketball coaches who’ve recently left a lasting impression on me. There certainly are many impressive collegiate coaches, but these 4 stand out to me. I wish them each well as they continue to teach young players and build teams that give us memorable March moments. 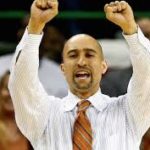 I have to admit I was first drawn to Shaka because of his surname, Smart-a Zulu warrior name. How blessed can one man be to have the last name, Smart? It fits. He is smart and was quite young when he led his Virginia Commonwealth University (VCU) team to the Final Four in 2011. He’s another sideline runner with demonstrative hands and a loud voice. But, what overshadows all of this is the respect the players seems to have for him regardless of the school he’s at. Shaka has been coaching at the University of Texas (Longhorns) since 2015. 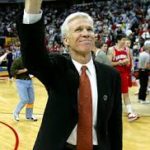 Must be something about North Carolina men’s basketball coaches and me. Here’s another gem I respect and admire coaching a NC school. I fan crushed on him so much that in 2008 I sent him a handwritten letter after his team’s legendary tournament run. Yes, that was the year the world became aware of Stephen Curry as the Wildcats advanced to the Elite Eight. His mannerisms, humbleness and overall coaching style inspired me to write and say, among other things, that if our son ever wanted to play basketball I wanted him to play under the guidance of someone with his character. Impressively, he contacted me. It wasn’t a recruiting contact. Rather, he acknowledged that the behavior, words and antics of coaches do matter, privately and publicly.  Simply, he was glad I saw him in a positive manner and acknowledged it. Class. All class for 25+ years. 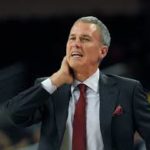 I’m a woman with eyes. And in 2013 Coach Enfield initially caught my eye more so for his All-American looks than his coaching style. That year he brought the Florida Gulf Coast team to the tournament, leading them into the Sweet Sixteen. As his team took down powerhouses like Georgetown, he became less about eye candy and more about grit and style. He’s now leading a very talented USC team and teaching his up-tempo offense to a group of players who seem to be adapting well to Coach’s style.

Coach McKillop was right. Coaches and their antics, teaching style and behavior matter both publicly and during practice. To me, it matters most in my tournament team selections.  I have no way of knowing if the public persona these coaches present is real or true. All I know is I’ve watched each of them over time and each consistently produces winning teams and teaches great basketball skills. I’m inspired by not only their wins but also their leadership skills and style.

Here’s wishing every team much success in the tournament. And may you prevail in your brackets!

2010: Gordon Hayward comes oh so close to winning the National Championship from half court for Butler. Duke prevails.

2016: “Jenkins for the championship!” Villanova wins 2016 championship on buzzer beating 3.

1993: Chris Webber’s infamous travel and timeout call when there was not a timeout left.

2 thoughts on “Why This Woman is Obsessed with March Madness”