Father’s Day is a celebration honoring fathers and celebrating fatherhood, paternal bonds, and the influence of fathers in society. Click here to read about the history of Father’s Day.

Fathers are an important influence on a child life, no matter the age. Time is the greatest gift a father can give his child. Here’s the story of four outstanding fathers who share the joys of being a father every day, but especially on Father’s Day.

“My father used to play with my brother and me in the yard. Mother would come out and say, “You’re tearing up the grass.” “We’re not raising grass,” Dad would reply. “We’re raising boys.”
– Harmon Killebrew 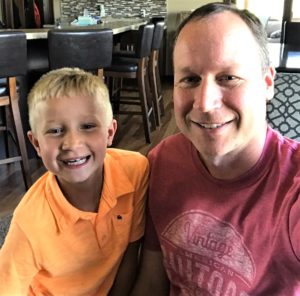 Darwyn leads his seven-year-old son Jacob by example in both his work and personal life, just as his father Leon did. He cares about role modeling a strong work ethic. “I want Jacob to know he can do many things if he’s determined, tries his hardest and pushes through adversity.”

Darwyn is self-employed and struggles with balancing work with the demands of a young family. “From my own dad, I learned that hard work does pay off in building a solid business for years to come. But, sometimes hard choices and sacrifices are required.”

Darwyn understands his son needs him to be there for him. So, he arranges his schedule to take him to athletic practices, play with him after work and go on hikes together. Jacob knows he matters to his dad; Darwyn follows through on his promises by showing up and telling him he loves him.

The two of them bond over sports and watching action movies. And, Jacob is always up for trying new things and giving them 100 percent. He’s taken up golf and baseball, often making his dad chase a long one down the street. He helps Darwyn fix things around the house “so we don’t have to buy new things every time something breaks.”

Jacob learns from his dad by watching him and spending time with him. He’s seeing how to treat others with respect, to own up to his mistakes and fix it for the next time and to be nice to his teammates on the baseball field, understanding everyone is there to learn the game.

The greatest lesson Jacob is learning from his dad, “Everything will fall into place if you know and serve the Lord.”

“The father who does not teach his son his duties is equally guilty with the son who neglects them.”
– Confucius

Jim values time with his 12-year-old son, Trenten. “I hope he now recognizes the amount of time we spent together and the priority he is in my life.” The two share hunting, travel and dogs in common. The specific interest gives them time together to enjoy it while also talking about school, sports and life. Jim especially likes traveling with Trenten. “It’s amazing what I can learn traveling 8-10 hours in a vehicle with him.”

Jim learned a lot from his grandpa who spent time fishing and talking about farming and school with him. “He passed away in 1986, but there are many times I wish Trenten was able to meet him.”

Trenten, who comes across as shy, is described as funny and smart by his dad. Jim’s now speaking to him about growing into a man. Trenten’s learning not to make promises he cannot keep. He’s been taught his word is the only thing in life no one can take away from him. Trenten has seen that by working hard things will fall into place. He knows the world does not owe him anything and that he is capable of doing anything he wants, if he sets his mind to it.

Jim, a banker, teaches Trenten about money. “I like to present him with options so he understands real costs. Everything is about choices. For instance, if he buys something, what is he not able to do since he spent his money.”

At this age, Jim urges Trenten to have fun and find something in life he’s passionate about. “He will spend the rest of his life working and worrying. I also encourage him to make friends with everyone. One never knows when someone you meet might be in a place to help you out one day.” 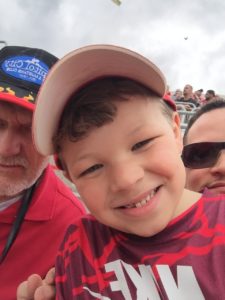 Michael and seven-year-old Noah have rituals, like the donut shop. Every Saturday morning, they head out to eat donuts while talking and laughing. Usually they leave with some for the girls back home-mother and younger sister.

They have other notable rituals. Their daily drive to school starts with a prayer followed by a game of guessing what types of trucks will be in the gym parking lot as they drive by. They celebrate their appreciation of superheroes like Teenage Mutant Ninja Turtles and Transformers with Friday night pizza and movie nights, mom and sister included.

Their shared enjoyment of music has them singing and dancing along to Christian Hip-Hop songs. They play catch football and shoot hoops and enjoy watching NFL games. Noah has attended a Nebraska Cornhuskers football game, his dad’s favorite team, but has started rooting for the Iowa Hawkeyes, to get under Michael’s skin.

Michael knows it’s during these shared activities and rituals that he will get honest feedback on what Noah is going through. Michael loves talking to his son. “Noah’s laugh and sense of humor are infectious.”

Michael wants Noah to know he works hard to be a great role model to him. Like his father, Bill, demonstrated, Michael wants to show Noah how to be a good husband by showing affection for his wife and doing nice things for her. “I let Noah be part of this process too. He has good insight and it’s a great teaching moment.”

Michael’s greatest wish for Noah is to know who he is and to love others as Christ loves us. He’s also teaching him: 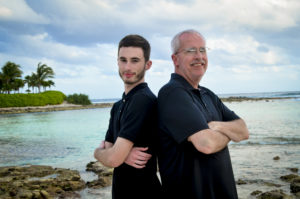 Ken’s son, Alex, at age 22, is a young adult. Much of the way Ken parented was role modeled for him by his father, Lee, who was “an extremely kind and respectful man with a very strong work ethic. He was a leader who taught me how to overcome adversity and take responsibility for supporting my family.”

Ken strives hard to role model ‘integrity’ for Alex. “I want him to do things with honesty, the right way and live by the Golden Rule.” He wants nothing more for Alex than for him to be happy and to live a fulfilled life-on his terms.

“I want him to make the most of his life doing what he desires and knowing that he can, and more likely will, make adjustments along the way.” Ken also knows that if Alex chooses to be a husband and father, he will need to compromise and serve others to experience a fulfilled life.

Ken’s done his best to prepare Alex for adulthood by teaching him to:

Through the years, Ken and Alex have created a bond and enjoyed life through sports, household and yard projects and business ventures. They share an obsession with Louisville Cardinals team sports and watching sporting events on television and at games.

The two have painted many home interiors together and enhanced yards through landscaping. They have created and implemented business plans, some successfully, others not.  They’ve jointly discovered their passions, had fun and felt a sense of accomplishment.

Ken feels he’s raised a genuinely good and caring son who has a “great head on his shoulders and makes wise decisions.” He’s proud that Alex has “stayed out of trouble” and shown he knows the difference between right and wrong. “I feel confident Alex has an extremely bright future ahead of him, both personally and professionally. It has been fulfilling and rewarding to be Alex’s father. He has brought more joy into my life than I could have hoped for. He is an incredible son whom I love so much.”

Linda Leier Thomason is a former CEO who writes freelance business and travel stories, along with feature articles. Her work experiences include a Fortune 500 corporation, federal government, entrepreneurship and small business. Find out more about Linda by clicking the “Meet Linda” tab above. Interested in working together? Complete this form below.